Peru 4 – From Cusco to Puno and Lake Titicaca and then on to Arequipa.

26th June – 5 degrees when we get up and brave the cold here in Cusco but we are leaving today for Puno and Lake Titicaca in the southeast.  Titicaca is an Aymara word meaning ‘Puma’s Rock’ which refers to an unusual boulder on the Island of the Sun.  The lake is the highest navigable lake in the world, with Puno sitting at 3875m….so it won’t be a lot warmer.

Our road follows a farming valley with flowing rivers and enormous hills lining each side.  Fields full of golden grass, corn and maize, although most of the latter has now been cut, the corn cobs drying in the sun.  Winding, narrow tracks lead up the hillsides to a patchwork of yellow, green and brown reaching almost to the top.  Cattle graze amongst the stubble and we watch a team of 4 ponies being driven in a circle to thrash the corn. 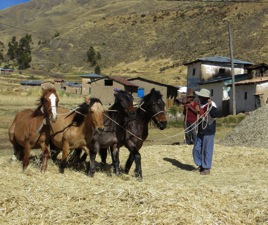 It’s a golden landscape now, except for craggy outcrops with pockets of snow.  Between Sicuani and Santa Rosa, rugged, snow-capped mountains bring an icy wind, but the skies are vast and a deep blue….quite a magical landscape! 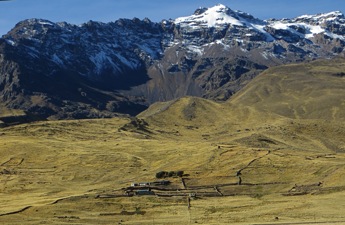 The high mountains fade after Santa Rosa and the Cordillera Vilcanoto, the late afternoon sun illuminating the yellow and casting deep shadows in the folds of the hills.  Rivers winding their way across the valley floor are an iridescent blue. 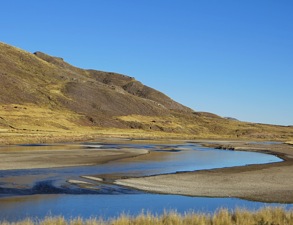 We reach Juliaca at 3824m, the outskirts reminding us of the huge industrial area of El Alto in Bolivia.

A grim place full of unfinished buildings, dust, dirt and diversions, the latter making us late in arriving in Puno, now a mass of fairy lights spreading up the hillsides in the darkness.  It looks much bigger than we imagined and it takes time to find Hotel Sonesta Posadas del Inca situated by the lake and where we know we can park and camp.  However, it is bitterly cold and dark when we arrive and we don’t fancy camping in these temperatures so late.  We are given an excellent discount on a beautiful room with a luxurious bathroom……what a treat!  We go down to the restaurant for a light meal and discover later in the evening that it was a good thing that we took a room, as I spend a sleepless night feeling really unwell.

27th June – Although it is a struggle to get going, I decide that after coming all this way we cannot miss our visit to one of the floating reed islands on Lake Titicaca.   Our tour taxi arrives to take us to the port and our boat leaves at approx. 9.30a.m. with a small group of people, making its way through the totora reeds, which are used to construct the floating islands, homes and boats, to the island of Tata Quille. 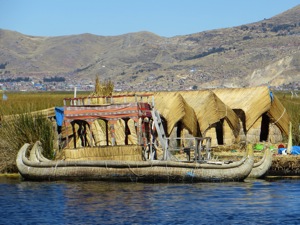 The island of Tata Quile has a population of 13. People marry from families on other islands and every island has a ‘President’ who is in charge.  It is interesting to learn how the islands are made, using the roots of the reed and the surrounding earth, which are then made into large blocks, tied together and anchored to the floor of the lake.  Layers of totora reeds are then laid in alternate directions to build up a thick bed about 2m deep.  The ends of the reed are white and when peeled back like a banana, can be eaten, a bit tasteless but juicy and refreshing. 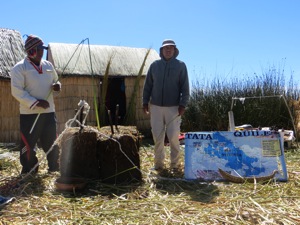 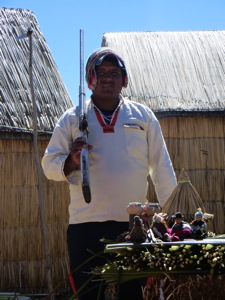 The women spend much of their time making colourful wall hangings and cushion covers, the pictures on every one telling a story. 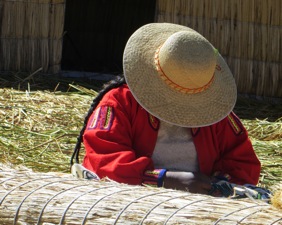 The whole trip is very interesting but very touristy, but the only way to visit these unique, man-made floating islands that have been inhabited since their construction by Uros Indians centuries ago.  We all take a ride on one of their large reed boats and before we all leave the island, we are entertained by the women and a little girl, singing some children’s songs in English which they look a little uncomfortable doing. Perhaps it would have been nicer to have heard some Peruvian songs.  The vast skies however, are a deep blue and the lake like a mirror. 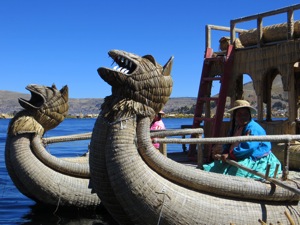 When we arrive back at the port, our taxi is waiting to take us back to the hotel, it has all been very well organised and I am glad we made the trip.  I have all afternoon and night to sleep off a stomach bug, which I now realise I have.

28th June – We are told that it was -2 degrees early this morning and we are so glad that we were not waking up in our roof tent.  Alpaca are grazing on the grass leading down to the lake and the British-built ship Yavari, is moored just beyond them. 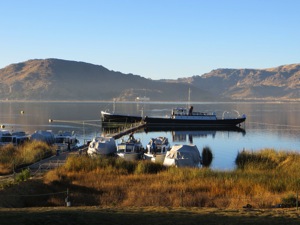 This vessel was shipped in pieces from England to Peru and in 1862, they were transported by mules and llamas over the Andes, a journey that took 6 years.  The parts were then reconstructed on the shores of Lake Titicaca and after starting life as a Peruvian navy gunship, it later ended up rusting on the lake’s shore.  In 1982, an English woman formed the Yavari Project in a bid to save it and it is now being restored, so that people will eventually be able to sail across Lake Titicaca in the not too distant future.

When we leave Puno, we drive back through the Plaza de Armas with its 17th century cathedral.

We return to the hectic town of Juliaca, where we struggle once more to find the road which will take us this time, to Arequipa.

The journey to Arequipa is once again through endless, treeless hills and valleys of golden grass.  We pass Laguna Lagunillas, a beautiful blue amongst the yellow and with a backdrop of mountains sprinkled with snow but it is a bleak and desolate landscape. 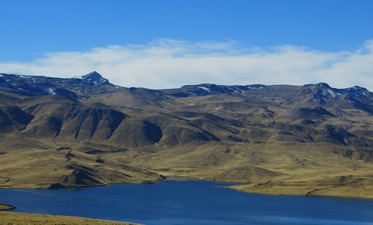 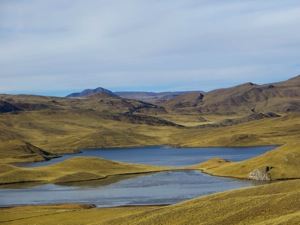 Arequipa is surrounded by snow-capped volcanoes – Misti, Chachani and Picha Picha.  Volcano El Misti (5822m) is a magnificent sight when it comes into view, with snow on its flat, crater top.

We hit Arequipa in the rush hour and crawl through the traffic and fumes.  It is dusk as we arrive at Las Mercedes, a residential hostel where we can park in their yard and garden area and have access to showers and toilets.  We are greeted by a family from South Africa, also with a Landie and later meet a Brazilian couple, again travelling in a Land Rover….3 landies!  A Swiss couple are in front of us with a camper van that we met in Foz in Brazil and a French camper is in front of that, so we have plenty of company.

At only 2350m Arequipa has a temperate climate with many hours of sunshine.  We are really looking forward to some warmer weather, particularly at night, after Cusco and Puno.

This entry was posted in Peru. Bookmark the permalink.